Sorry that this post is a little late. I completed this post in Microsoft Word and thought that I posted it on Friday, but I was mistaken. This is a small sample of what my front page might look like when my project has it’s own website.

As their communities grow, individuals of the Latinx community are migrating to non-traditional locations. For example, between 1990 and 2006, Latin American populations increased in North Carolina, Arkansas, and Georgia by over 500%(Odem & Lacy). While numbers largely increase in Southern and rural areas, Scholars Karen M. Kaufmann and Antonio Rodriguez point out that most research on political participation for Latinx individuals is carried out in traditional areas like Los Angeles and New York. Therefore, this project will focus on comparing traditionally and non-traditionally located Latinx communities and their barriers to political participation as well as their actual participation. Compelling research by Matt A. Barreto indicates that foreign-born populations are regularly ignored by the party structure but are more likely to vote than those born in America. Therefore, this research will focus on the capability and motivations for immigrant populations. This interactive map will allow users to compare different barriers to political participation such as: accessibility to public transit, amount of organizations meant to represent Latinx populations, and economic backgrounds. As users are able to turn on and off layers, they will be able to compare the locations structures and see the outcome of the advantages/disadvantages to political participation. Direct comparisons between locations will help to better understand what makes a location more viable for political participation. This research can be used to improve localities in integrating immigrant populations into American political culture.

Odem, Mary E. & Lacy, Elaine. (2009). Latino Immigrants and the
Transformation of the U.S. South, The University of Georgia Press: Athens
and London.

What Digital Scholarship Means to Me

Digital Humanities covers many different fields of study, and those within DH debate over what exactly is and is not DH. However, Bucknell has decided to change the title of this program from Digital Humanities to Digital Scholarship.  I like the change because the different name is more inclusive of other fields of study. I believe the emphasis of inclusion is more representative of the principles and values of DH. Over this past week and a half, I have learned a few definitions of digital scholarship that I could rely on for this blog post. But I like to keep things simple, so I will speak briefly about my takeaway from this new knowledge.

Over the week, I was able to look over a few digital scholarship projects including: Ellas Tienen Nombre, The Map of Early and Modern London, and Snow Fall: The Avalanche at Tunnel Creek. From these projects, I was able to reflect upon the scope of Digital Scholarship/Humanities, and while most scholars probably wouldn’t agree, I think Digital Scholarship is about making academia sexy. The principles of making the data accessible to a wide audience, collaborating to expand ideas (including incorporating data from viewers), representing under-represented communities, and using digital technology make Digital Scholarship interesting to those who do not focus on that field of study. Digital Scholarship is the new, exciting, and fun cousin to traditional scholarship. I am excited to incorporate these ideals into my project.

These projects have given me inspiration and a clearer idea of what I plan to do over my summer. My project was originally to look deeply into data sets, and I still plan to do so, but I plan to create visualizations for the data as I look through them. To me, charts and tables are difficult to read and learn from. It is important to have a visual display to truly understand trends or patterns. Therefore, I will be spending most of my time creating maps of the Latinx community in select cities. I understand that these technologies take time to make, and the projects we saw were the product of many years with many hands at work. Because I only have 8 weeks, I need to be realistic about how much data I can represent. I plan to finish at least 3 representations; I think that 3 is always a good number to work with. It is not too much, and it is not too few. That is the main reason 3 is my ideal number of maps, but once I get to work I know that the number might change depending on how long it takes me to create my first map. I am motivated and ready to begin learning ARC GIS, I’m sure it will be fun getting used to it.

My big picture takeaway from this week is that I will have to start getting to work fast! I’m not sure if I have enough time to make all these representations—especially since apparently the library is closed at 5 and will be closed every weekend! But here’s to putting my best foot forward!

First Blog Post: An Optimistic Outlook for the Summer of 2018

Summer, a time for beach fun and barbeques—but also research? That’s right, instead of wasting my days away in the sun, I will be back at Bucknell working with the Bertrand Library staff and Professor Stokes-Brown on a project proposed to me back in the fall. Initially, I wanted to do this research apart from a program like the Digital Scholarship Summer Research Fellowship, but once I discovered this program, I realized that it would be better to work in this small group that emphasizes technology.

I look forward to learning data visualization and other technologies that advance perspectives in traditional research. I hope to learn as many tools as possible because I believe they will advance my capability to analyze data. I am a visual learner, and these methods better suit my ability to comprehend data than traditional charts and graphs. I also enjoy the small team aspect of the DSSR program, and I know that I will need the motivation from my cohort. I am the type of person who relies on an amount of outside motivation to actualize my goals. We have already decided to do weekly check-ins which will keep me on track with completing the amount of work that I aspire toward. I also look forward to their criticisms of my project along the way that will mold my project into the best project within my power.

My project will study group solidarity and political participation of the Latinx communities that reside in non-traditional locations. For example, we will look at large Latinx communities in North Carolina and Iowa in comparison to those within California or New York. 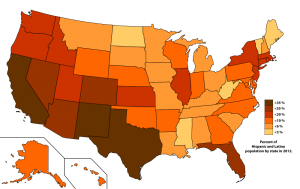 My hypothesis is not fully developed, but it may resemble: members of the populations of the Latinx community have more/less group solidarity in non-traditional locations than traditional locations. The idea is that higher political participation is a result of higher group solidarity, and we plan to look at different types of political participation to gage a communities group consciousness. Professor Stokes-Brown mentioned using the 2002 Latino Immigrant National Election Study, but it could be possible to use other election data sets that are more current. There are many types of political participation, so I will need to focus on one or two to be realistic about my time over the summer. I hope to create interactive maps for each data set that will be used, and if I can create maps that are detailed and thorough, further research on this topic could be made easier.

This is my first attempt at academic research, and I know that I will have many questions and complications along the way. Luckily, I am optimistic about my ability to complete this work, and I hope that my project will create useful resources to study group consciousness. I will also have my cohort, a full team at the Bertrand Library, and my mentor for support along the way. To everyone reading: thanks for following my academic journey, and I hope my project will turn out thought provoking and useful. Until next week!

Alexis Colon is a political science major graduating in the class of 2019. For her project, she will be working with Dr. Atiya Stokes-Brown to study political participation and group consciousness within the Latinx communities settled in non-traditional locations. She is very excited

to be exploring all of the new digital tools through the Digital Humanities program and to learn all about research within DH. At school, she is a member of the Rooke Chapel Ringers, the philosophy club,  the Arabic club, and she works for the Samek Art Museum. In her free time, she enjoys watching movies and learning how to play the guitar. She hopes to have an extremely productive summer and create an amazing digital project!

Theme by Anders Noren — Up ↑